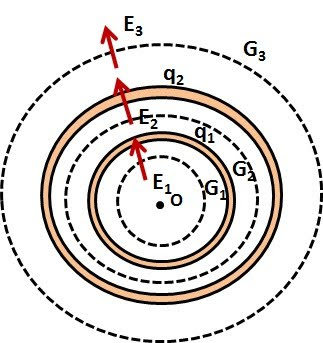 The electric potential at the center of the sphere O, will be due to each of the two spheres, equal to,

If this potential Vo is zero then from (2) we have,

Consider a spherical Gaussian surface within the innermost sphere (G1 as shown in the figure). Since there is no charge within this sphere, there must be no electric flux through G1, in other words the net electric filed inside the sphere will be zero at all points.

. Since the net charge inside this sphere is q1, the electric field in this region can be determined using Gauss law and is given by,

. The net charge within this Gaussian surface is

. Hence, from Gauss law, the electric field in this region is given by,

The electric potential V(r) as a function of distance is given by, 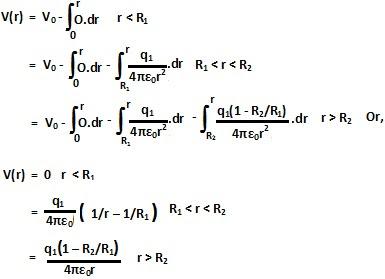