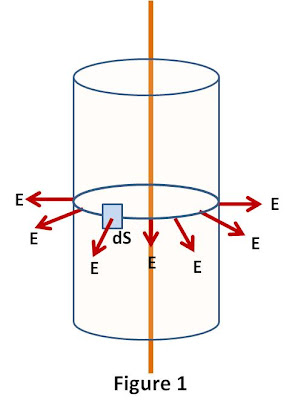 First let us determine the electric field due to an infinitely long thread at any point in space. The easiest way to do this is using Gauss law which says,

The total charge contained in the cylinder will be,

Hence, from Gauss Law we can write,

and E will be directed radially outwards from the cylinder as shown in Figure 1. 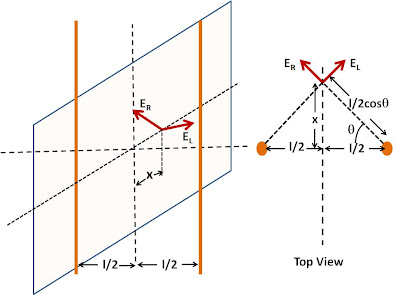 The situation of the problem is indicated in the Figure above. The question essentially asks at what distance x will the net electric field due to the two charged threads be maximum. Suppose that the point at a distance x is at an angle

with the line connecting the charges i.e.

is close to 0, the electric fields from both the threads simply cancel each other, when

As seen in the top view (the threads are coming out of the screen towards your face), based on elementary trigonometry, the distance of the point from each of the threads is given by,

Hence, the electric fields due to the left and right threads are given by, 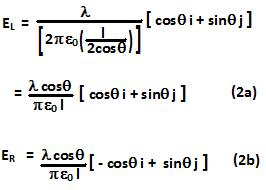 The net electric field is thus given by,

and the electric field strength is,

Posted by Krishna Kant Chintalapudi at 8:08 AM 4 comments: