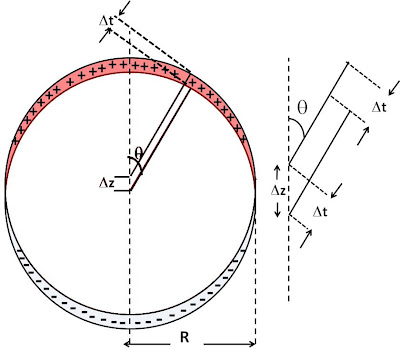 a) First let us try and understand what happens in this problem. As shown in the figure, two charged spheres with charge densities are

. While the -ive and the +ive charges from the two spheres cancel in the center of the spheres. However, since the spheres are displaced with respect to each other (the upper sphere is +ively charged) around the periphery the charges will not cancel each other as shown in the figure. The amount of charge in the periphery will however, depend on the polar angle

. As seen from the figure, the charge will be zero at

and the maximum at

. In fact what Irodov asks to prove is that is the displacement

is small enough, then the two spheres can be replaced by a single hollow sphere with a surface change density that depends on the angle

To prove this, let us first determine the thickness of the charged section

as a function of the polar angle

. As seen from the figure, 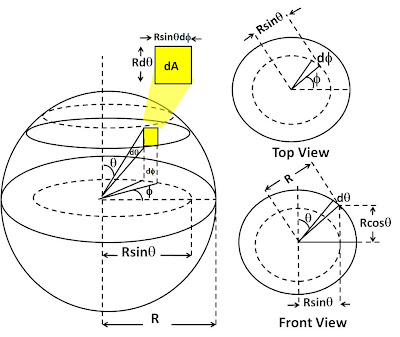 respectively and subtends a polar angle of

and an azimuthal angle of

as shown in the figure. The surface area of this section will be,

The charge contained in this section will this be,

then we would have,

Since the center of the negatively charged sphere is located

units below that of the positively charged sphere, the electric field due to this sphere is given by,

The net electric field due to the two sphere are given by,